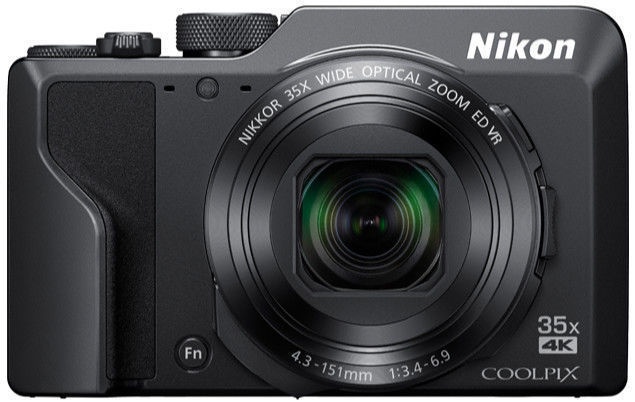 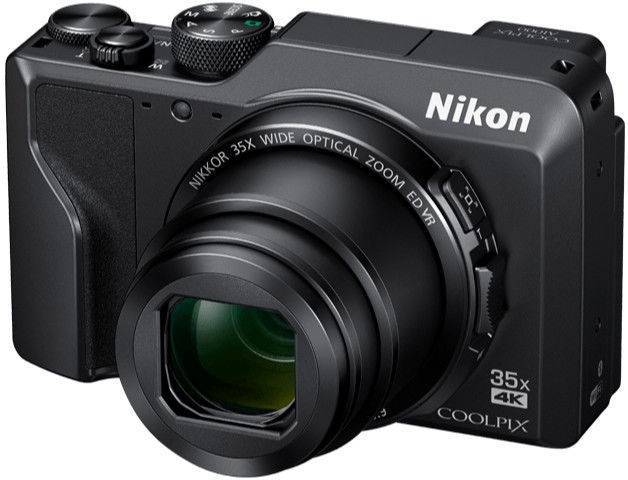 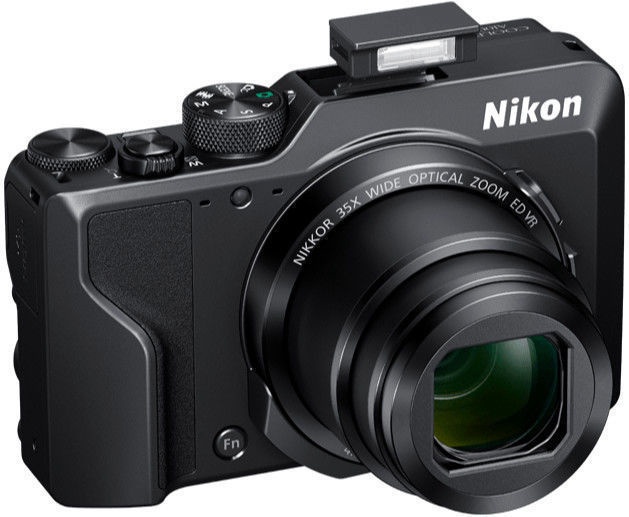 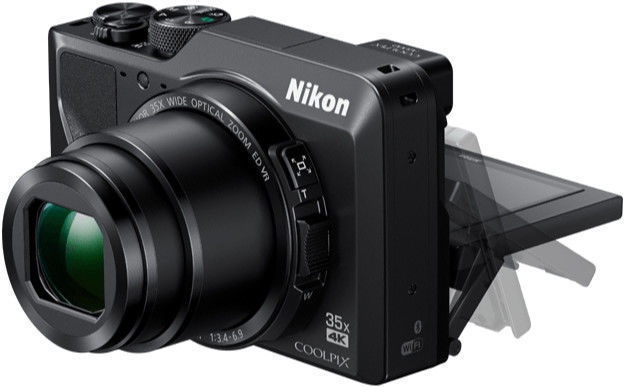 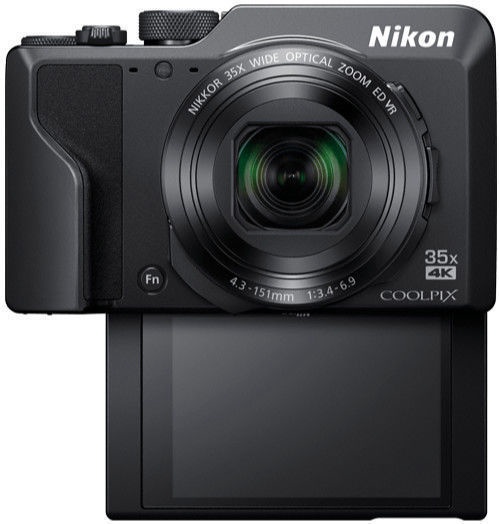 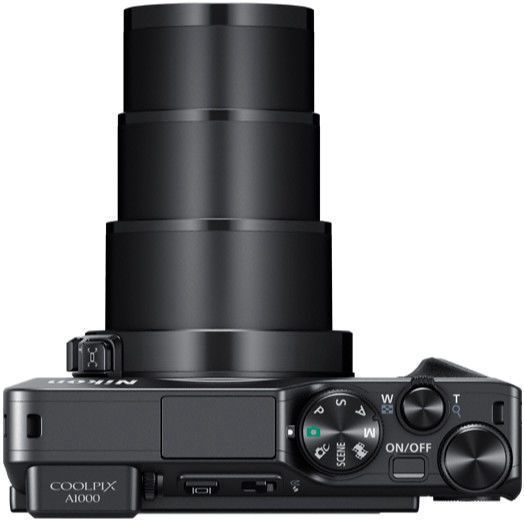 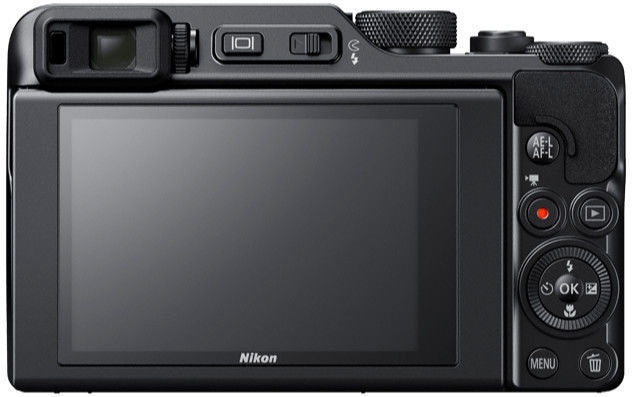 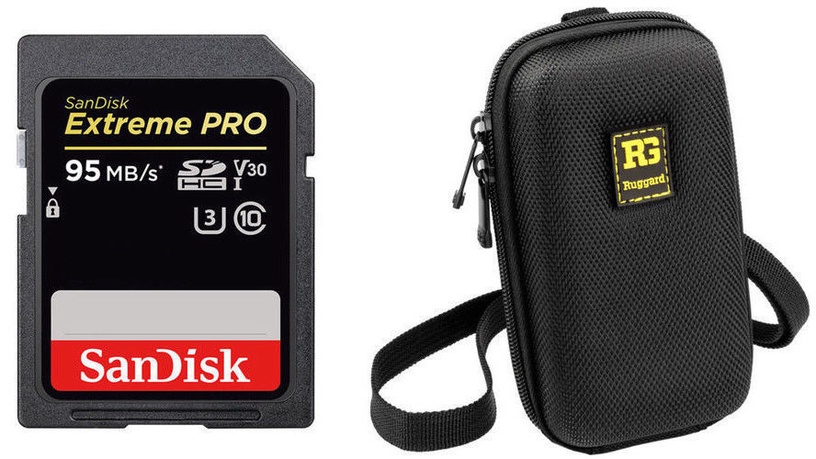 A small camera with huge potential.
Packed inside this sleek, high-end design is a super telephoto NIKKOR zoom lens and serious photo and video power: versatile low-light capabilities, rock-steady image and video stabilization, 4K Ultra HD recording, P/S/A/M control, RAW shooting, creative modes and filters, a tilting touchscreen and even an ultra-sharp electronic viewfinder for composing like a pro. It connects to the SnapBridge 2.5 app for instant sharing and remote control, and it handles like a dream. For those who want an all-in-one camera that can do it all, the COOLPIX A1000 delivers.

Near, far and everything in between 35x optical zoom lens with macro capability
The COOLPIX A1000 is compact and lightweight—perfect for a pocket or purse. Start zooming, and its superb 35x optical zoom NIKKOR lens begins to extend, taking you from wide-angle vistas to flattering portraits, all the way to super telephoto close-ups (840mm equivalent view). In the rare cases when you need to get closer, Dynamic Fine Zoom doubles that reach for a whopping 1,680mm equivalent view. Turn on Macro Mode and get as close as approx. 0.4 in. from your subject to reveal the smallest details.


Beautiful photos in challenging light Backside-illuminated CMOS sensor and wide ISO range
A backside-illuminated image sensor gathers maximum light, so you can take sharper photos in dark situations. That performance is enhanced by a wide ISO range—from ISO 100 to 6400—and its high-performance NIKKOR lens. Capture high-quality images with the optimal balance between high resolution and less noise at high sensitivities, even in dimly lit environments. In addition, the VR (Vibration Reduction) function that provides an effect equivalent to a shutter speed 3.0 stops faster (based on CIPA Standards) contributes to reproducing sharp, crisp images even without a tripod.

Sharper details in bright light and shadows Active D-Lighting for movies and stills
Nikon's Active D-Lighting brings out the details in highlights and shadows, which can often be lost. It's particularly effective when shooting heavily backlit subjects or in situations with direct sunlight. Images can be captured just the way you see them, and video footage can be utilized with no further color grading.


RAW (NRW) format Easier editing and post-processing
The COOLPIX A1000 can capture uncompressed RAW (NRW) images. Preserve all the data from its image sensor and then create your ideal look using Nikon’s free ViewNX-i and Capture NX-D software without lowering image quality.


Let your creativity shine Creative Mode and P/S/A/M dial
Select from five preset Creative Modes and check out how they look with four different effects applied. You have a choice of 20 image options in total. A great way to capture dramatic nightscapes is with the Multiple Exposure Lighten function, which compares multiple images taken using interval timer photography then automatically composites the brightest parts to express light paths. The command dial lets you quickly access four exposure modes (P/S/A/M) and other manual settings for personal control that full auto cannot provide.

Electronic Viewfinder (EVF)
Cut through bright outdoor light with a 1166k-dot electronic viewfinder. Simply put the camera to your eye, and it will automatically switch the display from the touchscreen to the EVF.

Tilting Touchscreen
Shoot from interesting angles with the 3-inch, approx. 1036k-dot tilting LCD display with anti-reflection coating. Touch to focus, shoot and navigate menus. Swipe through your shots and pinch to zoom.

Snap-back Zoom Button
At super telephoto distances, you can sometimes lose sight of your subject. If this happens, just press the Snap-back zoom button to quickly zoom out so you can reacquire your subject. Or customize this button to activate manual focus, aperture, ISO sensitivity, exposure compensation or white balance.


Ready when the moment strikes Fast start-up, autofocus and performance
The COOLPIX A1000 has quick start-up, shortened time lag, and responsive autofocus to get your subject clearly focused without having to wait. When a unique opportunity comes your way, capturing the moment is only a split-second away.


High-end Nikon design Sophisticated design and styling
The simple yet sophisticated exterior design helps embody the essence of a high-end Nikon camera. Clear, bold shapes unite to project an overall impression of high quality and superior functions, including a new grip designed to comfortably fit in the hands. Metallic materials are employed for the front of the lens barrel and side of the body, resulting in a camera you’ll be proud to show off to your friends.

Always connected Unleash new possibilities with a compatible smartphone
Install Nikon's SnapBridge 2.5 app on a compatible smartphone or tablet and unlock exciting new capabilities with the COOLPIX A1000. Built-in Wi-Fi® and Bluetooth® Low Energy (BLE) maintain a constant connection between the app and your camera, so each shot you take automatically transfers to your smartphone or tablet for sharing, editing with photo apps or uploading to your favorite sites. You can even use the SnapBridge app to control your camera remotely.

CMOS
Complementary metal-oxide semiconductor, one of the two main types of image sensors used in digital cameras. The Nikon COOLPIX CMOS image sensor with a backside illumination structure increases the amount of light that each pixel receives. The resulting improvement in noise and sensitivity reduction makes the select COOLPIX cameras more capable when shooting night scenes or in dark indoor situations.

Scene Auto Selector / Easy Auto Mode
Nikon COOLPIX cameras are so smart they know what kind of picture you're taking and can automatically select from six commonly used scene modes, eliminating the mode-setting procedure and streamlining the shooting process.

Subject Tracking
COOLPIX cameras and select D-SLRs in Live View mode, maintain focus on a moving subject using a contrast detection system, which is based on the principle that objects in a scene that are in focus display the highest contrast.

Wi-Fi
Refers to wireless technology and wireless communication. In photography, it's most commonly the wireless transmission of images directly from a camera to a computer in order to achieve a swifter workflow.

This camera’s built-in Wi-Fi® capability can only be used with a compatible iPhone®, iPad®, and/or iPod touch® or smart devices running on the Android™ operating system. The Nikon SnapBridge application must be installed on the device before it can be used with this camera.

Updating to Version 2
Images downloaded to the smart device with version 1.x will no longer be displayed in the Gallery after you upgrade to version 2, but can be viewed in the “Photos” app provided with the smart device.