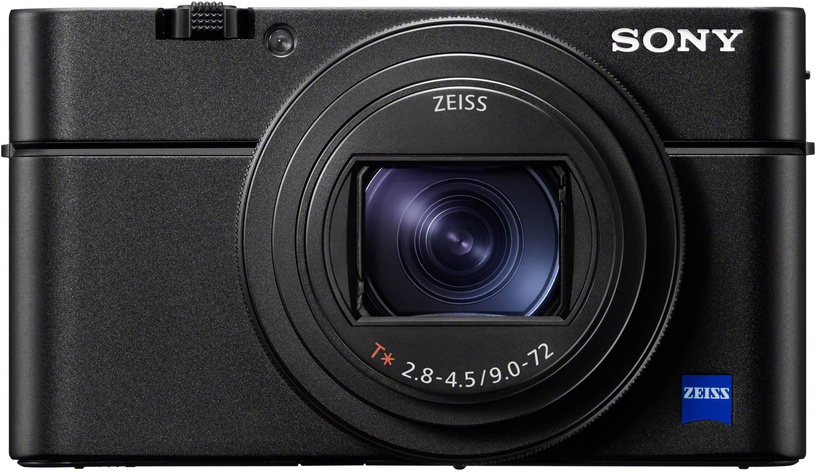 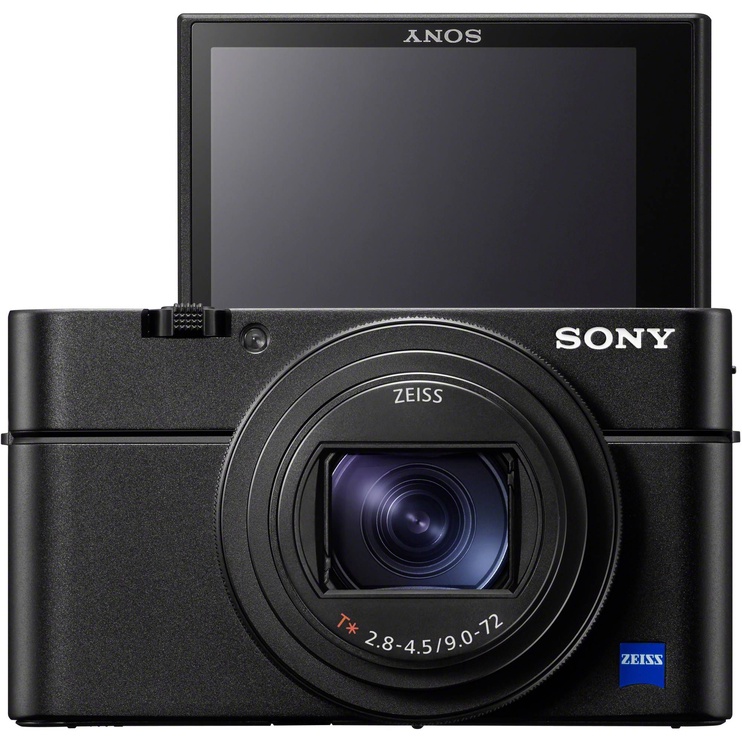 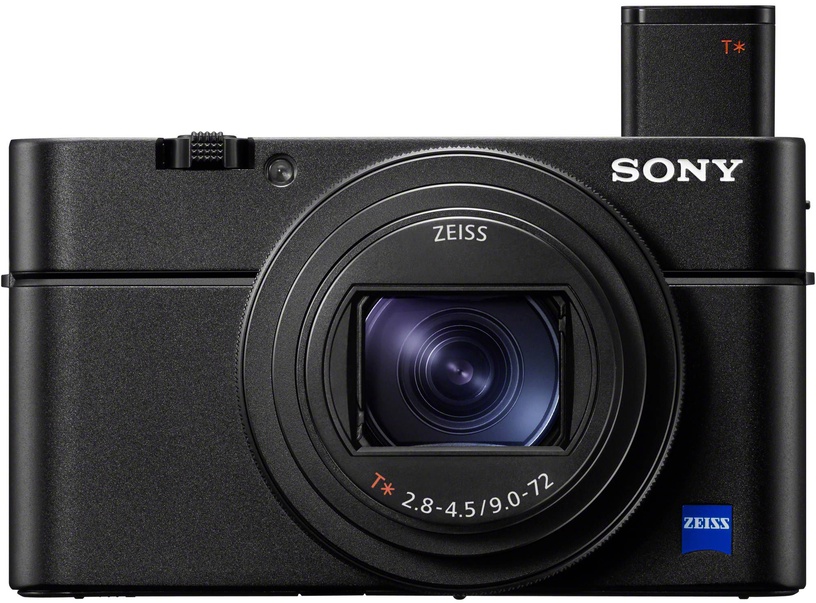 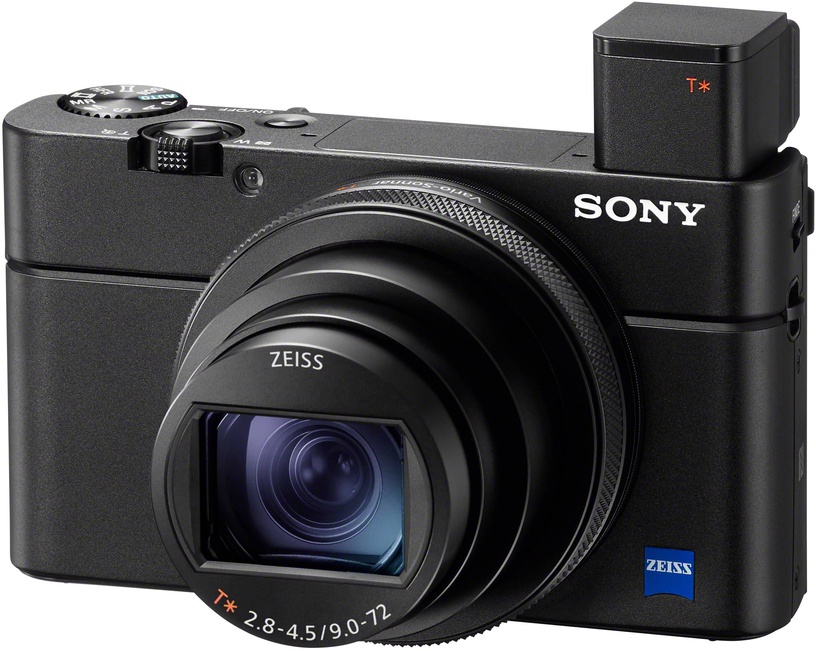 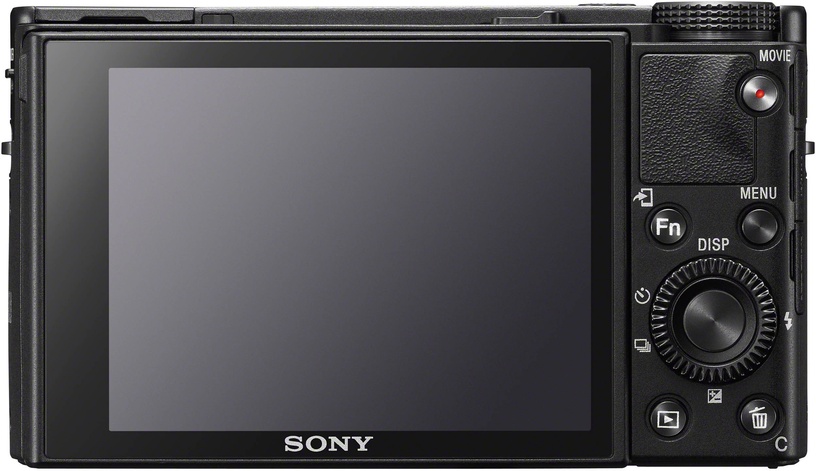 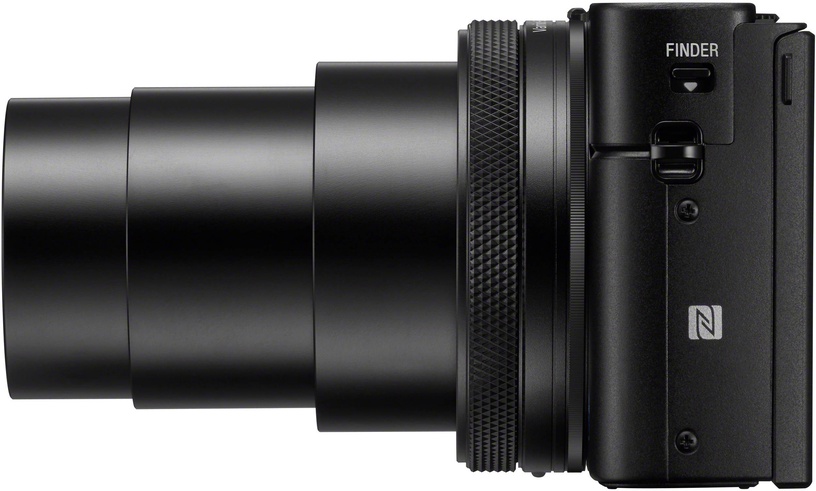 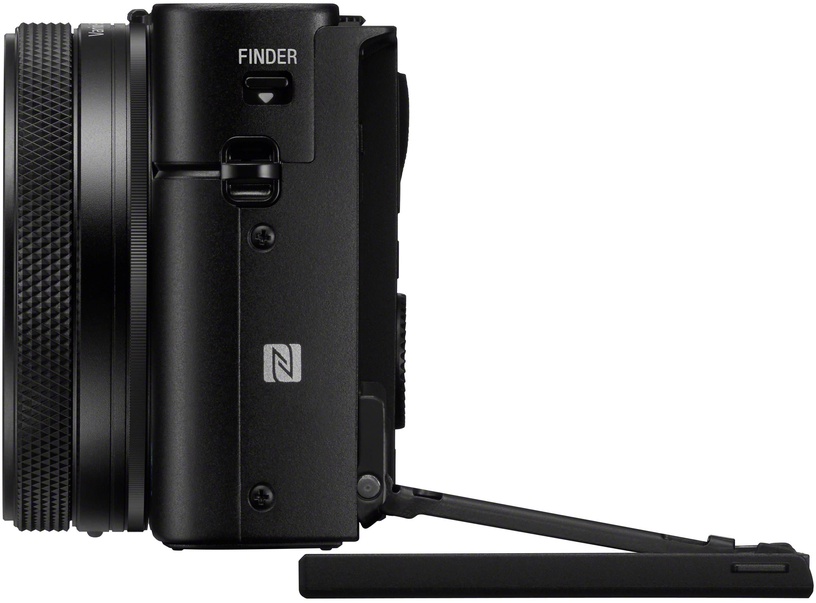 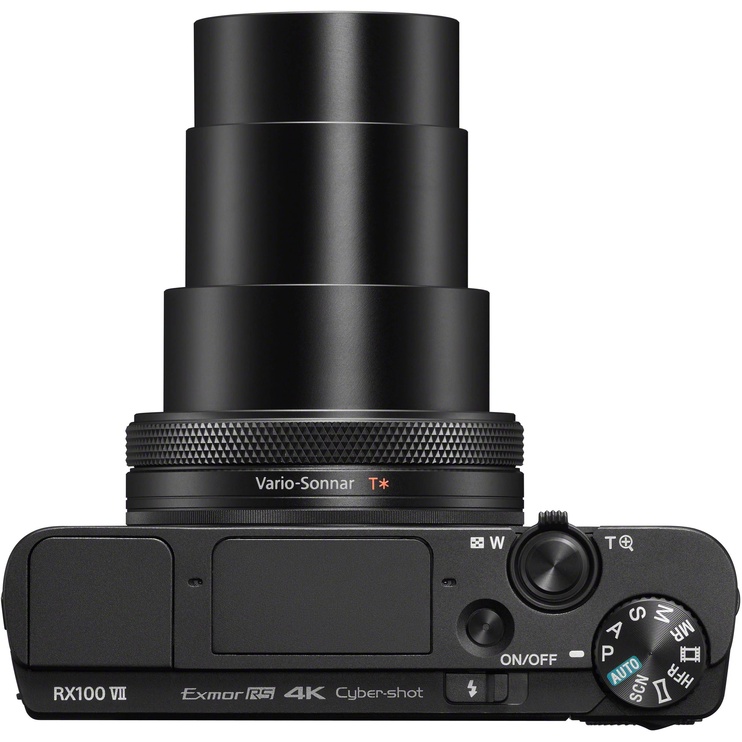 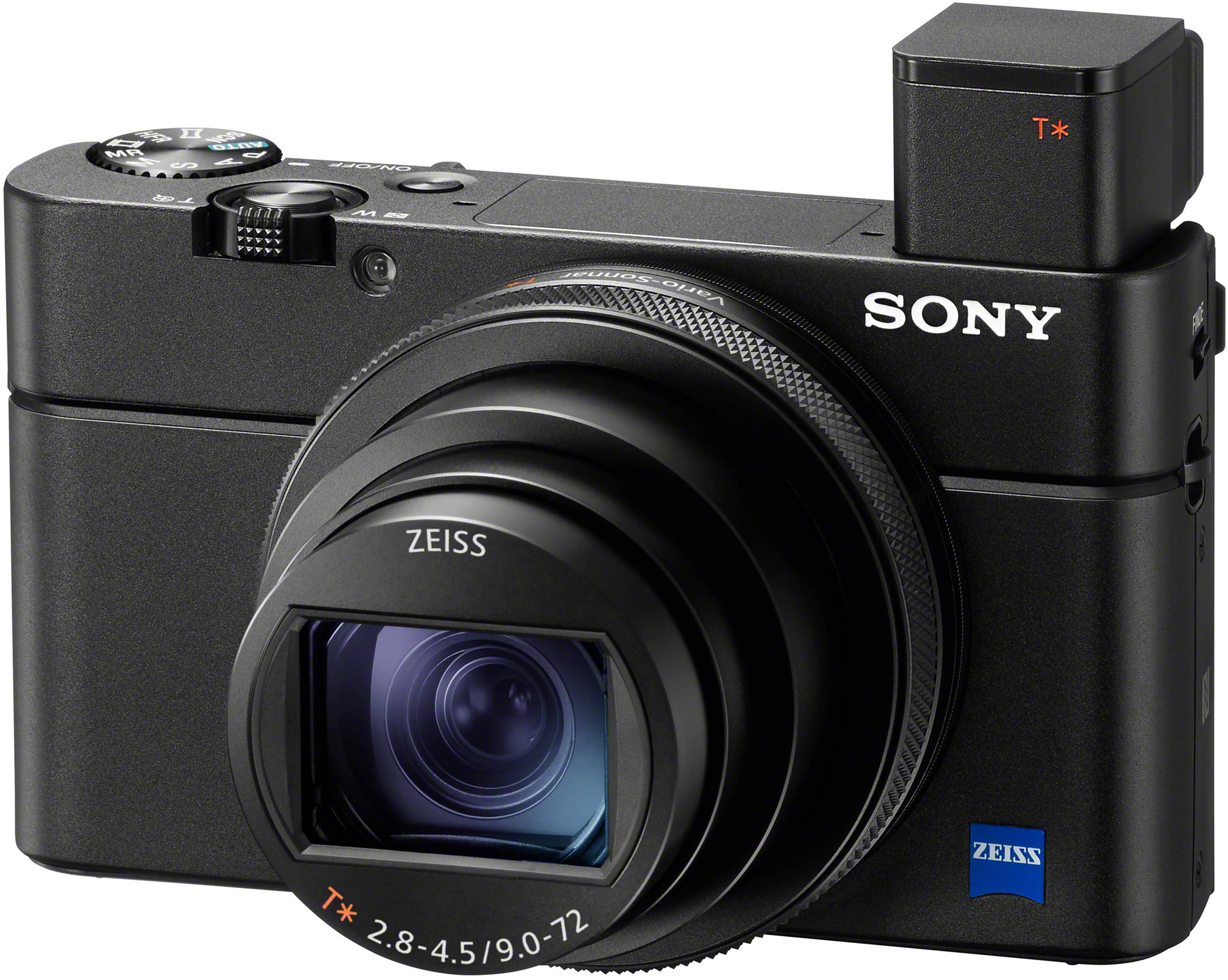 Mixing speed, reach, and portability, the Sony Cyber-shot DSC-RX100 VII is a pocket-sized camera packing a wealth of stills and video versatility. This seventh-generation camera in the esteemed RX100 series is the second to feature the impressive 24-200mm-equivalent ZEISS Vario-Sonnar T* lens that covers wide-angle to telephoto focal lengths for greater shooting flexibility in a variety of conditions. Making use of the extended range is a redesigned 20.1MP 1" Exmor RS CMOS sensor, along with an improved BIONZ X image processor, for fast shooting performance, high sensitivity to ISO 12800, and UHD 4K video recording. The updated sensor design is all about speed and enables blackout-free continuous shooting up to 20 fps for easier subject tracking. Single Burst Shooting also permits shooting at an extreme 90-fps setting for working with the fastest moving subjects. The sensor's design also provides a 357-point hybrid AF system for quick and accurate focus performance and subject tracking in both stills and video modes. A stacked design and front-end LSI also contribute to quickened operation and enhanced image quality. Video performance also remains impressive with the incorporation of S-Log3 and HLG gamma settings, and High Frame Rate shooting allows you to record at up to 960 fps for slow-motion playback.

Retaining the classic sleek form factor of an RX100, the VII still has a pocketable stature despite the extended zoom lens. A pop-up 2.36m-dot OLED electronic viewfinder is a sleek means for eye-level viewing or, alternatively, a 3.0" 921.6k-dot LCD touchscreen can be used. The LCD features a tilting design to support working from high and low angles and its touch capability permits the use of Touch Focus and Touch Shutter functions. The camera also sports Bluetooth and Wi-Fi connectivity for sharing imagery to a linked mobile device or for embedding location information from your smartphone.

The flexible reach is complemented by four stop-effective Optical SteadyShot image stabilization, which minimizes the appearance of camera shake to suit handheld shooting in low-light conditions. Additionally, Clear Image Zoom can also be used to further extend the effective reach of the zoom with nearly no image degradation.
Fast Hybrid AF System with 315 Phase-Detection Points
The RX100 VII is equipped with an on-sensor phase-detection AF system that dramatically improves autofocus speed for both stills and video. The camera uses a hybrid system with 357 phase-detection points that cover approximately 68% of the frame along with a 425-area contrast-detection system to provide fast, accurate focusing in a range of situations. The RX100 VII is able to lock onto subjects quickly, in just 0.02 seconds, and it can use Real-time Tracking for AI-based tracking on moving subjects. Real-time Eye AF, suitable for both humans and animals, also ensures critical sharpness when shooting portraits.
UHD 4K Video Recording
Able to record UHD 4K video at 30/24 fps, the RX100 VII, is capable of producing movies with exceptional clarity. By using a full pixel readout without binning, the camera collects about 1.7x the information needed for 4K output. This oversampling helps to increase clarity while reducing the impact of moiré and jaggies. Benefitting sharper recording, an Active SteadyShot mode can be used for recording that prioritizes smoothness when reducing the appearance of camera shake. Fast Hybrid AF is available during movie shooting for ensuring accurate, fast tracking using phase-detection AF points. The camera also offers Sony's advanced XAVC S format for recording a high bit rates up to 100 Mb/s. In addition to high-resolution internal recording, uncompressed HDMI output also enables the use of an optional external recorder for clean 4K recording with 4:2:2 sampling.

Affording extensive customizable color and gamma controls, the RX100 VII allows users to adjust the gamma, black level, knee, color level, and more. Also, users can use the same S-Log2 Gamma Curve that is found on high-end Sony Cinema cameras that squeezes up to 1300% more dynamic range into the video signal then traditional REC709, for increased post-production flexibility. HLG (Hybrid Log-Gamma) support is also available, along with the BT.2020 color space, for recording within a wide color gamut and, in addition to S-Log2, S-Log3 is also available for producing an effective 14-stop dynamic range with increased grading control in the shadow to mid-tone regions of the image.

Speed is also a huge advantage of the RX100 VII, and, in video, users will benefit from advanced High Frame Rate shooting and super slow motion. In Full HD, shooters will have access to a standard 120 fps setting that will enable outstanding slow motion when placed in editing software. In addition to this, the camera also offers a dedicated HFR mode that boosts the camera's frame rate to up to 960 fps.

A Photo Capture function is built directly into the camera, allowing shooters to quickly save an 8.29MP still from their UHD 4K movies. Full HD can also benefit from this feature, where users will be able to pull a 2MP still. Additionally, the camera is NTSC/PAL switchable, making it usable around the world, vertical videos can be recorded with embedded metadata to correct for the vertical orientation during playback.
Body Design and Wireless Connectivity
Other Camera Features

Designed for SD devices that can capture Full HD, 3D, and 4K video, as well as raw and burst photography, the 128GB Extreme PRO UHS-I SDXC Memory Card from SanDisk has a capacity of 128GB, is compatible with the UHS-I bus, and features a speed class rating of V30, which guarantees minimum write speeds of 30 MB/s. If your device does not support the V30 standard, this card also supports the U3 standard, which likewise guarantees minimum write speeds of 30 MB/s. Read speeds are supported up to 170 MB/s and write speeds max out at 90 MB/s. A built-in write-protect switch helps to safeguard against the accidental erasure of card data.

While this card has been designed for cameras that are UHS-I / V30 / U3 compatible, it may be used in devices that do not support UHS-I / V30 / U3. However, bear in mind that this card will then default to your device's speed class and bus rating, such as UHS-I and U1, which supports minimum write speeds of 10 MB/s, or Class 10, which also supports minimum write speeds of 10 MB/s.

As with most SanDisk cards, this memory card is shockproof, X-ray proof, waterproof, while also being able to withstand temperatures from -13 to 185°F, allowing you to take this card with you into extreme environments, such as snow, deserts, and pools. Should the card's data become compromised, you also benefit from the option to download RescuePRO Deluxe software as well as a limited lifetime warranty.